Back to Funded Charities

Surfers Against Sewage is a national marine conservation charity which inspires communities to protect oceans. 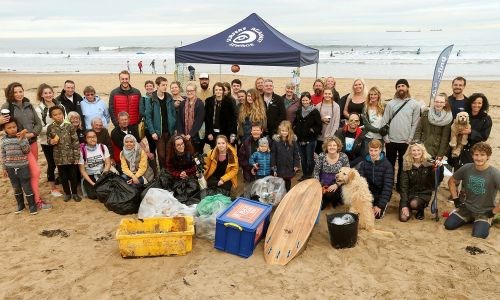 Players of People's Postcode Lottery have raised an incredible £300,000 for Surfers Against Sewage to help support the charity's vital work protecting oceans, beaches, waves, and wildlife.

"Thanks to the generous support of players of People's Postcode Lottery, we are delighted to be able to grow our fantastic community of volunteers helping to keep the UK's coastline protected."

Surfers Against Sewage is a national marine conservation and campaigning charity that inspires, unites, and empowers communities to take action to protect the marine environment.

In the last year, Surfers Against Sewage mobilised over 50,000 volunteers to clean beaches across the country, removing 100 tonnes of plastic pollution. The charity was also instrumental in the government's plans to introduce a deposit return scheme for drinks containers, and a single-use plastic ban in the UK.

"Importantly this funding will also help us to develop our charity sustainably, making it more robust and resilient for the future. It will significantly increase the communities that we work with to deliver a cleaner coastal environment for everyone in the UK."

"Players can be proud that the money they are raising will be helping hard working volunteers for Surfers Against Sewage to tackle the pollution affecting our beaches and we will all benefit from that."

Surfers Against Sewage is the latest charity to receive funds from players of People's Postcode Lottery, who have raised over £291 Million for good causes and charities across Great Britain and internationally.

To help out in a beach clean near you or to get involved with your local community volunteers have a look to see what's going on in your area.


Read more about Surfers Against Sewage